While at Thanksgiving dinner at a friend’s house, Bonnie and I noticed that they were selling their truck and trailer. These friends of ours had been light duty campers since they retired. However, they had not gone camping in over a year, and they had finally come to the conclusion that they just weren’t that much into it anymore.

One of the good things about Bonnie is that if you put a few glasses of wine in her, she really enjoys buying things. I refer you to our entertainment center, also known as the monstrosity. So, as the evening wore on and the wine flowed freely, I began to prod Bonnie with the thought of purchasing the truck and trailer. Although I had enough money to purchase the truck, I was a bit short on the trailer. Bonnie, on the other hand, has a mattress or two that are busting at the seams.

Surprisingly, Bonnie was very much in favor of making the purchase. And this wasn’t the wine talking. No, we have talked about this for a while. It’s part of our retirement plan. What really pushed us into a buying frenzy was the fact that our friends offered to sell us the truck and trailer for about half of what it was worth. Half! After walking through it and noticing how well kept it was, we couldn’t pass it up.

So, without further ado, here she is: 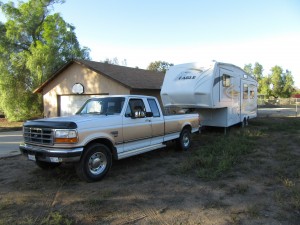 The truck is a 1996 Ford F250, with a 7.5 L 460cc engine. The previous owner had a banks power kit installed on it, which is supposed to add another 15 -20 hp. The truck is in good condition with only 69,200 original miles on it. Other than towing the trailer around three or four times a year, they never really used it. The only thing I don’t like about it is the tow mirrors. Or lack of tow mirrors. Otherwise, the truck is in excellent condition and runs great!

The trailer is a 2008 Jayco Eagle 299RLS. The interior is in excellent condition. It actually looks new. The outside is a little worse for wear. It has sat in the sun for most of it’s existence, so the stickers are baked off and the finish is fading. The only major problem is that one of the awning arms is bent (He backed it into a fence!). The awning still works, but it has to be manually guided in and out. It also needs a new battery. The current battery is 8 years old (it may be the original) and it won’t hold a charge anymore.

Here we are inside the trailer: 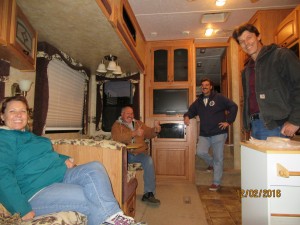 Arlene, Mark, Greg, and Larry standing in the trailer

Here is the floor plan: 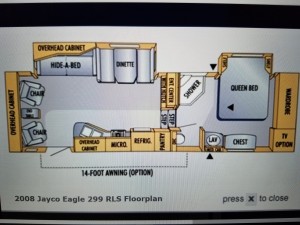 Other than a clothes washer, the trailer has everything we need. It even has a satellite dish! Although I could easily take up full time residence in it, Bonnie constantly reminds me: “We’re not going to live in the trailer”. (Let me get you a glass of wine while we talk about it)

We are planning on taking our first camping trip to Lake Perris in January. We have another planned in February, and a third at Rancho Jurupa in March. We might squeeze in one or two more before we make a planned run for the Sequoias this summer.